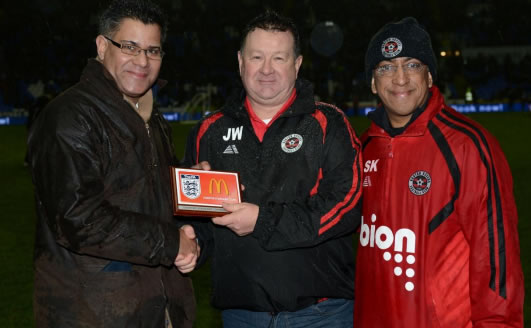 The FA Charter Standard programme supported by McDonald’s is a kitemark, which recognises and rewards high quality levels of provision in club and league football. The kitemark is awarded to clubs and leagues that are well run, sustainable, which place child protection, quality coaching and safety paramount.

Criteria for achieving the entry level award include having a trained Welfare Officer, CRB checks for all volunteers, Emergency Aid-trained volunteers linked to each team, Respect programme sign-up, a Level One coach for each youth team, appropriate club administration in place and a volunteer co-ordinator.

The ‘hidden’ benefits are key to most clubs working towards the kitemark. By achieving an FA Charter Standard Club Award, you are demonstrating to all members, parents, sponsors and the public, that you are a well-organised, safe Club offering opportunities for all.

The kitemark lasts for one season and will be renewed each year as part of the club reaffiliation process. Kitemark awards can be withdrawn if a club has a poor disciplinary record, fails to attend in-service FA Charter Standard events or is unable to continue to meet the criteria.

This website uses cookies to improve your experience while you navigate through the website. Out of these, the cookies that are categorized as necessary are stored on your browser as they are essential for the working of basic functionalities of the website. We also use third-party cookies that help us analyze and understand how you use this website. These cookies will be stored in your browser only with your consent. You also have the option to opt-out of these cookies. But opting out of some of these cookies may affect your browsing experience.
Necessary Always Enabled

Any cookies that may not be particularly necessary for the website to function and is used specifically to collect user personal data via analytics, ads, other embedded contents are termed as non-necessary cookies. It is mandatory to procure user consent prior to running these cookies on your website.

SAVE & ACCEPT
Parent/Guardian Code of Conduct

Children as you know, develop differently and at different rates; they react differently to the same pressures. At Barton Rovers Football Club we are attempting to give all the young people who play soccer a good and worthwhile experience and their relationships with all adults, at matches and training, must be positive and sporting.

The Club expects parents/carers and supporters to set an example for young people, regardless of race or creed. You should remember that young people are not playing to satisfy your ambitions young people are involved for their enjoyment – not yours.

– Avoid the temptation to coach your child during the game teamwork and effort are as important as winning. You should accept losing without undue disappointment your winning side should not be allowed to gloat over their victory.

– You should never ridicule or shout at a young person for making a mistake, or for losing.

– Praise them – or keep quiet, you should set an example – applaud good play by both teams. You should recognise the value and importance of the coaches, who give up their time to help young people and support in whatever way you can.

– You should help to remove all verbal and physical abuse in soccer.

– You should at all times respect players, team officials and supporters, both your own and the opposition regardless of race or creed, ability or disability.

– You should always respect the match official never publicly question their decisions and avoid words or actions which may mislead them.

The Club’s primary aim is to provide a facility for young people in the area to have the opportunity to play both competitive and non competitive football. Within this framework we encourage sportsmanship, friendship and try to make football an enjoyable family recreation, in view of this a player should:

– Seek improvement in their ability, skill, technique and fitness

– Give total effort and commitment, at all times, for the good of the team

– Be aware of the laws, rules and spirit of the game and abide by them accordingly

– Accept losing without undue disappointment and not gloat over victory

– At all times respect players, team officials and supporters, both your own and the opposition regardless of race or creed, ability or disability

– At all times respect match officials, accept their decisions and avoid words or actions which may mislead them.